Once again my tried and tested 1st birthday card design, well if it ain't broke why fix it. I did mix it up a little bit this time by changing the image and dies I used but it still felt the same to make.

I think this image from Mo is too adorable and I also bought the boy version so that I had both, I know its an addiction. Must have all the things lol. 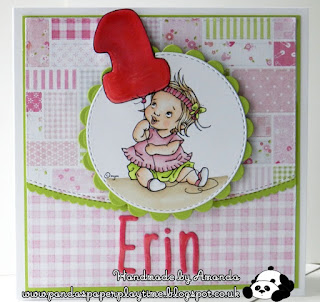 I have a huge penguin fan friend and I knew this image would be perfect for her birthday card.Now I am trying to make cards differently this year, if I buy a stamp for a specific person I am not going to wait until there birthday is almost upon me and I go into no mojo panic mode but make it once I have the stamp and idea. So this card is for a December birthday but I had to make it now, strike whilst the iron is hot is my new motto.

I have always wanted to try creating my own background with white on white diecuts, i think it looks quite effective and was definitely the look I wanted to achieve. I think I might try words on my next attempt.

Not much else to say on this one, it was very time consuming lining up all the towers but also very calming. I dod seem to have glue everywhere and I am so pleased I had an adhesive eraser handy lol. 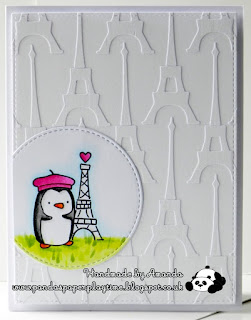 Thanks for Being My Friend

I got the idea for this card from the January MFT design team, they had used the new background stamp and die cut a word from it. I thought it would be a quick and simple idea to replicate, boy was I wrong lol.

I did learn a few valuable lessons though which I will share with you, number one even though you think colouring the whole background then die cutting the words will take longer it really won't. Number two if you don't heed number one you will need to refer to the original often to try to decipher what is what on your die cut word, this takes about three times as long as colouring the whole sheet lol.

Things I would do differently, well I would stamp two identical panels, colour one entirely in colours and one in grey, this way once the letters are cut I can make two cards probably a lot quicker than this one took.

I will say I would do this again as I think the sentiment really pops and it looks effective too. 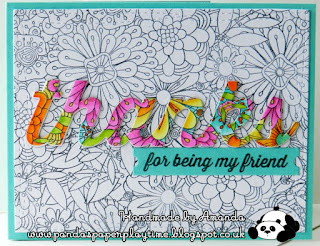 I seem to be addicted to the new range of stamps from Hunky-dory, this is the first of my second set of three and I have just seen the newest ones and I need them all. I am a fan of cute but there are certain people that you can't send that to so more realistic is the way to go.

Once i had coloured the large images I couldn't find any paper that matched so I made my own, with the smaller images in the set this was a doddle. I do find sitting and colouring a background to be very therapeutic.

I am entering the snippet playground as the black card was actually the packaging from stencils I bought at the newbury craft show in January. I have used this card before and I am sure I will do again. 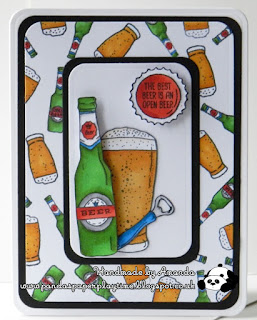 Challenges: Snippet Playground
Posted by Amanda at 07:30 No comments:

I think I need to apologise that I am still using images coloured in the last two 30 day challenges. I got so carried away colouring that I didn't realise how many I would have after the challenge ended. Now I would like to say this is the last but I think that would be a lie lol.

This stamp is from the free set that comes with Creative Stamper, this magazine is awesome, you get a full sheet of stamps plus the magazine gives you ideas on how to use the stamps too.

I had an idea and it worked, either I am getting better at executing my ideas or my ideas are getting simpler lol, either way I am happy. 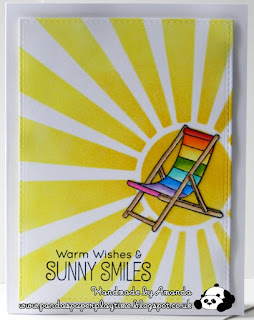 Ok so you may be sick of seeing this design on my blog, I would like to say I am sick of making cards in this design but that would be a lie lol. I think its so effective, especially when the stripes are copic coloured so I don't think it will be a design I stop using for a while, sorry.

This image was coloured as part of the last 30 day challenge and I didn't write down the colours I used so when I did the stripes I had to guess and they seem to match ok.

My trial lasted only the two cards I posted too, I am hoping to pick that back up but I had a few cards to make that replication wouldn't have worked for. 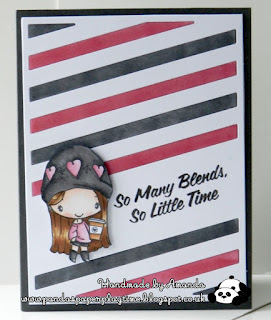 As promised a few days ago here is card two and I think my favourite. I think the hair worked better on this one. I did enjoy this trial so hopefully it will continue, fingers crossed. 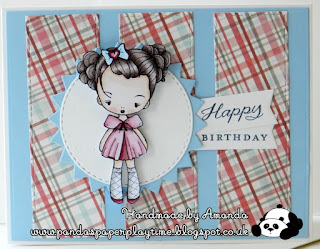 As part of my New Year Resolution, ok lets not call it that, lets call it a trial instead. The word resolution makes me want to break it straight away lol. Ok so my New Year Trial is to make two cards almost the same at the same time. Now this might only happen this one time but I am going to try as I struggle with layouts so using one for multiple cards makes more sense.

As my mojo is still missing I looked at Mojo Monday and found a sketch I could work with and that provided the layout, so all I had to do now was decide on the images and papers. I will be posting the other card in a few days, lets hope this is a trial I can keep to as this was so much easier than normal. 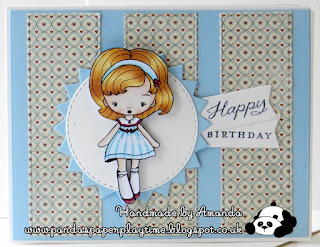 I normally make little boy cards for my MIL but she had said how she likes cards with little girls on them as well so as it was a special birthday I went with a little girl. This stamp was released when I first started card making as part of a TSV on QVC, back in the days when Dawn Bibby was the main attraction. I so wanted this set, stamps, a bag to store them in and other stuff but I wasn't a stamper so I decided against it, hubby came in from work and said buy it but it had already sold out and I was so disappointed. I searched eBay often but the bag and stamps went for ridiculous prices so I thought it was lost to me. Imagine my surprise then when I found it with several sets of stamps on eBay for a song, I had to buy it, this time I didn't even hesitate I pressed that buy-it-now button quicker than you can say "do you take paypal" and it was mine.

This is the first stamp I have used from the sets it contained, it stamped perfectly and is a lovely image to colour, only thing now is to use the other sets...time will tell lol.

Anyway enough waffling onto the card, which as my mojo is missing is fairly simple but the Mil liked it and that is all that mattered. I am hoping that Nit Wit release another purple kit soon though as I need to use different papers on her next card. 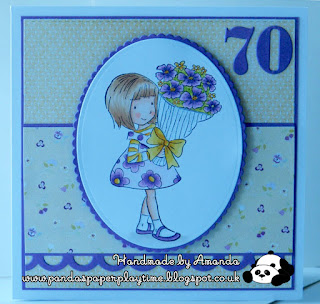 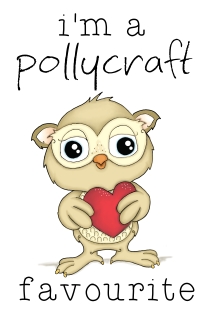 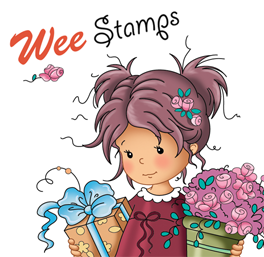